Puerto Rico 2017
Day 1 Travelogue.
So many wonders! I’ll start at the beginning.
The trip down here was fantastic. Southwest has direct non-stop flights from BWI. It is the only way to go. Super easy. The trip is a bit less than four hours and it flew by (no pun intended).
The heat and softly humid air felt more like a caress than a punch on the nose (when we stepped out of the airport terminal), and I have been loving every second of it. The palms are everywhere (especially numerous near the airport). And everything so far has been a delight.
I have been getting a chance to speak a good bit of Spanish. Everyone here has been so kind in looking past my mistakes. To a one, they have asked me where I learned my Spanish. When I answer that I learned in school, I get raised eyebrows and a, “You learned very well,” or a “You speak very well.” I’m rusty and they are gracious.
A few words to the wise. Unless you plan on riding buses or taking taxis, rent a car (and if you happen to )rent with Dollar, don’t bother going to the big Rental Center across the street from airport terminal. Instead, grab one of the ubiquitous shuttles. Yes, it is on the expensive side (the prices you get on Travelocity are “estimates” it turns out). But, the freedom of going where you want to go all over the island is a delight. We’ve been super lucky with parking as well. They say traffic here can be horrible (in downtown San Juan), but so far it hasn’t held a candle to DC traffic so it’s downright relaxing. 🙂
Two other quick notes: The money is in dollars, and the electrical outlets are the same as in the mainland USA.

As soon as we got to the hotel (The Wave on Condado), we met the fab José. He has been super helpful (as has everyone), and has answered all of my pedantic questions. And I’m going to adopt something he says for my own. Whenever I say, “grácias,” for yet another thing has done or question he has answered, he replies, “siempre,” or “always.” What a delightful way to do that interaction. He doesn’t say, “de nada,” (it’s nothing). He says, “Always.” I love that!

The Wave Hotel is a lovely little place in the middle of the downtown area. It’s still super close the ocean (on the North side of the island, you’re on the ocean and on the South, you’re on the Caribbean). It’s about half a kilometer to get to the water you see in the accompanying image.

The top floor has a limited view of the ocean and a few hot tubs for lounging. Rich and I brought wine and rum up there tonight and watched the clouds float by while the moon provided the mood lighting. I can recommend this place as an inexpensive alternative if your budget requires that sort of thriftiness. It’s not just inexpensive. The room is quaint and lovely (on the smallish side), the soundproofing is great, and the staff is just fabulous! 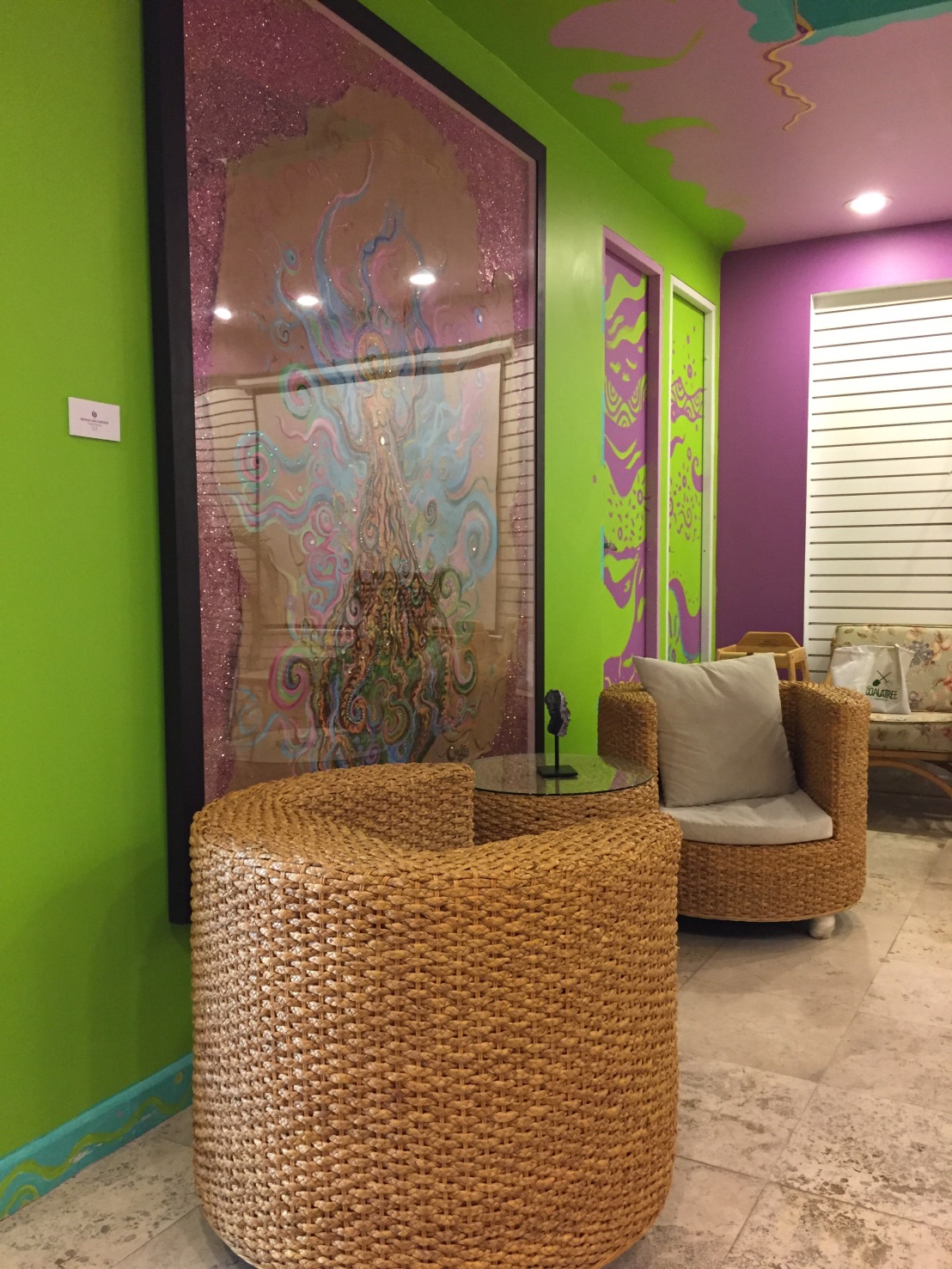 After we checked in, we found our way to the Suka Cafe. It’s run by a bunch of Buddhist nouveau hippies. The food took forever and a day but was delicious. The space reminded us both of the New Deal Cafe back in Greenbelt. The wall art was done by someone named GUS who would be perfectly at home featured in the AVAM (American Visionary Art Museum), and there is a big basket with rolled up yoga mats for yoga classes that take place there (presumably not when people are eating their lunches there. ;). )


Afterward, we headed to the ocean. We missed the sunset (not that you can see it much from the north part of the island), but we still watched the waves and even chased the waves a little.
After the ocean, we headed for more food and then spent the evening wandering Old Town San Juan. I couldn’t help but be reminded of Reykjavik for some reason. The architecture, the combination of styles, the winding, somewhat hilly streets, the incredibly friendly people – it all reminded me of Iceland a year ago. Of course, we were in shorts and t-shirts instead four layers of thermals, but the vibe is really similar. It has all been fab! I so needed this and am glad we came.
Tomorrow, we head to the rainforest and then kayaking in a bioluminescent algae bay. Supposedly, the algae are being shy and the visibility is terrible. We are still going because, who would turn down a moonlit kayak in a bay in Puerto Rico? Answer: No one.